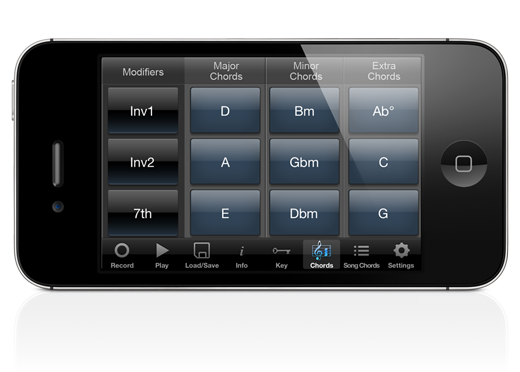 As a writer / producer involved in the making of Brit, Grammy and Ivor Norvello winning records I can say hand on heart that this software is fantastic, a real game changer.James Sanger UK

Use Simple Songwriter when you want to:

Beginners to advanced musicians can use this app to leave thinking behind and bring the fun back to music.

All the chords given are used by most POP/ ROCK songs and most pop/rock songs will use a combination of these chords.
The touchscreen gives you the perfect environment to quickly and easily generate song ideas. When you have a great song idea, record it for later practice on your chosen instrument.

List view allows you to browse your songs chords, while the song key section can transpose your idea to any key instantly.

Press your finger on any chord shown. 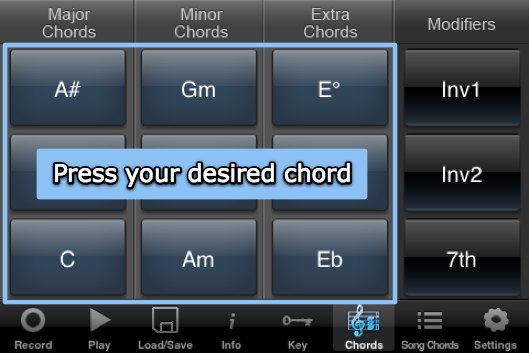 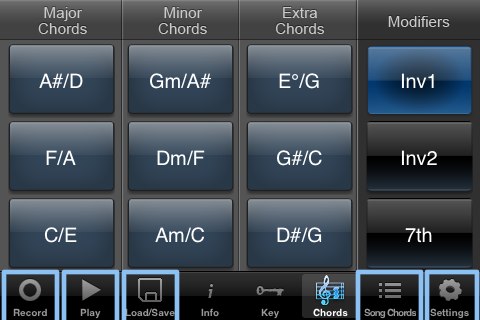 If you want to change the sound of the chord hold your finger or thumb on any modifier you want to add, then with another finger choose a chord to press . (NOTE: You will see the chord change when you do this) 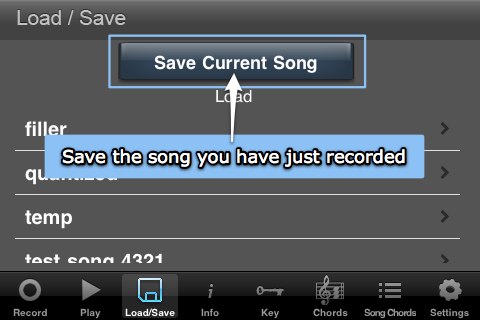 When you have an idea you would like to record hit the Rec button on the top left. When recorded hit stop. Choose the play button to hear it back, the song button to view a list of the chords or the save/load folder icon to save your song.

(You can also adjust the song tempo by selecting the bottom right "Settings" button.)

After selecting the "Save/Load" folder Icon, choose the "Save Current Song" button to save. Enter the name on the pop up keyboard and press "Done".

If you want to hear your song again in the future choose the folder icon , select your song and press the Play button.

NOTE: The key you save the song in will be restored upon load 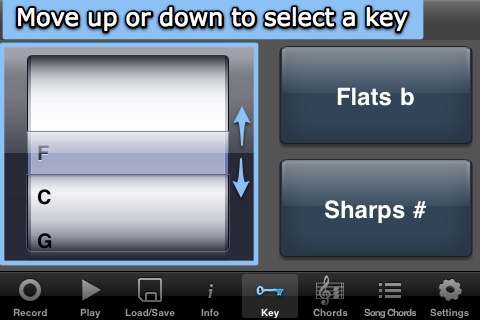 Press the key button in the bottom left then slide your finger up or down the picker to select a different key (NOTE: This also changes the key of your song.)

Experiment and have fun.

Removing this need for thinking about theory and just giving the users chords which all sound good together, no matter the key is the core principle behind Simple Songwriter and the reason it's so easy to sketch out good sounding phrases.

The top 6 chords are all "Scale tone chords" numbers 1-6. The first extra chord is the 7th scale tone chord and it is always diminished. (The small circle denotes that it is Diminished) .

The other 2 chords are the flat third and flat 7 scale tone chords.

(Note: The top 6 chords are the most commonly used. Most pop/rock songs will use a combination of these chords. Examine your favourite song to see what chord progression it uses.)

"Inv" stands for chord inversion. It is essentially the same chord but with its notes played in different order.

The C Major chord has 3 notes. C E G. A 1st inversion takes the bass note C and puts it at the end making the chord E G C.

This can also be shown as C/E, Meaning its a C major chord with the bass note being the E.

The C major 2nd inversion is then G C E. This has made the G note the bass and can be shown as C/G.

The chords are known as scale tone chords. This means they use only notes used in a particular scale. As such they will sound as though they belong together because all the notes played will be in the same scale.

In order of the chords this makes:

For example. If your key is set to "C" in the key section then any song you make will either be C major or A minor. If your chords start and end on A minor. The song will most likely be in the key of A minor and C major if it starts and ends with C major.

To see your scale tone chords displayed as numbers enable the "Show Chord Numbers" option in the settings tab.

Many songs use the same chord progression but factors such as the key, rhythm, and chord extensions can completely change the feel and sound of a song.